The patented Dicar Equalizer rotary die cut system increases die cut accuracy by correctly indexing the surface speed of the anvil cylinder to the speed of the die cylinder. The result is far greater diecutting dimensional accuracy than a conventional rotary diecutter.
The Equalizer consists of a chrome-plated anvil cylinder and an indexing bearing mounted on the cylinder with standard Dicar urethane covers mounted to the bearing. Since its introduction over ten years ago, over 1,000 Equalizer systems have been installed and are in daily operation in box plants all around the world.

The Dicar Equalizer eliminates the problem of the second blank from a two-up die becoming too short. This “piggy-back” effect is solved and it is no longer necessary to modify the second up section of the die to achieve a dimensional change in the second blank. The indexing function of the Equalizer also maintains consistency throughout the entire life of the anvil covers. With proper rotation the last cut is the same as the first.

Our new Equalizer design, introduced in 1998, uses the same principals while making cover rotation simple, logical and fast. The Boltless™ Equalok covers on the new Equalizer significantly reduce cover installation and rotation time by eliminating the need for mounting bolts.

After first removing the cutting die, cover rotation on our new Equalizer cover is accomplished by removing a section from one end, easily sliding over the others and adding the removed section back at the opposite end. Once in place, the sections automatically interlock for flawless Equalizer performance.

With the new Equalizer, cover rotation is typically completed in less than 5 minutes. The new Equalizer is available for most new and existing rotary die cutters. Installations of the original Equalizer can also be updated and modernized to this new system in your plant. 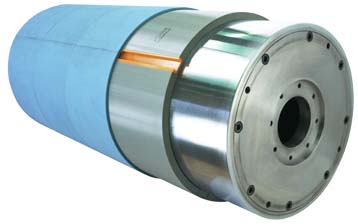 More about the product