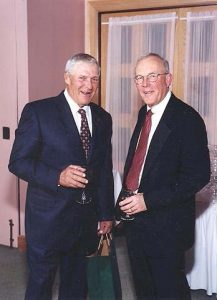 Dicar Inc. was founded in 1969 by Ronald Warll and Alan (Bud) Kirkpatrick, two remarkable men of vision, who paved the way for the success of Dicar Inc. Today Dicar maintains manufacturing facilities in both Pine Brook, New Jersey and Tomball, Texas. Dicar has sales offices and global stocking distribution. Dicar is acknowledged as the foremost supplier of urethane products to the corrugated industry worldwide.

In the fall of 1969, Warll and Kirkpatrick, motivated by their growing belief that there was a substantial market awaiting improved rotary die cutting covers, formed Dicar Inc. Most people believe the name was forged by combining the “Di” from die cutting with the “Car” from carton. For the record, Dicar is in fact an acronym derived from the initial letters of Ron’s and Bud’s wives’ names (Dianne Warll and Carin Kirkpatrick).

In their workshop in Riverdale, New Jersey, the partners successfully designed and manufactured both a one piece urethane rotary die cutting cover and a printing plate mounting system, which could be retrofitted in the customer’s plant without the need to remove the presses from production. Successfully completing their rotary die cutting blanket test in the summer of 1970, Warll and Kirkpatrick began to aggressively market the product.

In 1972, Dicar would partner with its first OEM customer. In the mid 70’s Dicar began to work on its now highly recognized, easily removable snap lock blanket. Patented in the 70’s, the Snap Lock Blanket became an additional growth catalyst. By 1980, Dicar’s commitment to research and development, quality products and caring service were well advanced.

In 1978, the company moved its headquarters manufacturing facility to its current manufacturing building in Pine Brook, New Jersey. By the mid-1980’s, it became apparent that increased manufacturing capabilities would be needed. In 1985, the company established a second plant in Tomball, Texas. Today Dicar maintains two facilities in Pine Brook, New Jersey, the Tomball, Texas plant, a technical center in Pittsburgh, Pennsylvania and a sales distribution center in Drachten, Netherlands.

Dicar Inc. looks forward to continued focus by meeting the market demands of being a full die cutting resource for our customers as well as expanding our product range of anvil covers and die cutting systems.

Our technical sales network and high quality products are supported by Dicar Consulting Services Worldwide as well as our local representatives. Our product and process experts provide hands on technical training on die cutting issues, production and processes. Much of the focus is on die making techniques, differences between paper liners and how these relate to various machine and box making challenges. The training does not only benefit Dicar personnel, but it has been a stepping stone to training at numerous corporate training centers, industry seminars including ACCCSA, TAPPI, IADD and AICC functions. The training is offered through throughout Europe, Asia, Latin America and North America.

Dicar products are proudly manufactured in the USA in our New Jersey and Texas facilities. We’re proud to offer a full range of products and support. We will continue to innovate and provide solutions by partnering with our customers throughout the corrugated box industry.